Choosing the right map scale for a project is not difficult in most cases.
However, it can quickly become complicated depending on the requirements.
And it’s even more complicated to change the scale of existing projects.
Therefore, it’s worthwhile to make the right settings right from the start.

At the beginning of a project, think about what purpose you are pursuing with it. What kind of map is it? Which scales do you need? How should the map be printed? What kind of competition will be held on it?

The OCAD symbol sets are based on the specifications of the International Orienteering Federation (IOF).
Every symbol set is intended for a specific scale.
For an orienteering map at a scale of 1:10'000, it is best to choose the symbol set Orienteering Map ISOM 2017 10 000.ocd

The different symbol sets that are used in orienteering sports can be ssen on the Symbol Set Overview page. 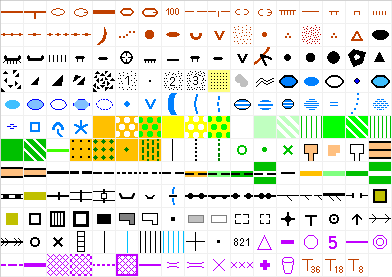 Scale Symbol has the same functionality as Enlarge/reduce symbols.

Define the correct settings at the beginning of a project and then try not to change them. With the function Change Scale this could be done afterwards, but can quickly lead to errors and a lot of work. Additionally, accuracy is lost with every conversion to a certain degree.

Due to color display, we recommend that you always create a PDF from OCAD first and then print this PDF. Go to Export Files (File>Export or Ctrl+E) to export your map as a PDF.

Map Scales for a Mapping Project

The two methods below will give you the same result.

The same is true for print scale 1:15’000. The two methods below will give you the same result.

Therefore, the three methods below will give you the same result .

It is recommended to choose the map scale that is used most often for printing. 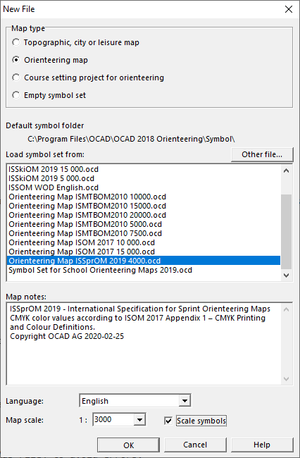 It is recommended to choose the map scale that is used most often for printing.

For School Maps at a scale of 1:1'000 to 1:2'500, choose the desired map scale and do not Scale Symbols. The symbol set for School Orienteering Maps is a recommendation and not a specification as the ISOM 2017 for forest maps and the ISSprOM2019 for sprint maps. This means that symbols can be changed or added as needed without a guilty conscience.

The description below is outdated. We recommend to use the Canvases command from the Course Setting menu to export courses and classes of the same course setting project as pdfs in different scales and layouts.

At some competitions it's common to have different scales for different age groups.

There are several ways to do so.

Most important appear and the following points.

Here's one of many possible ways how to deal with it: 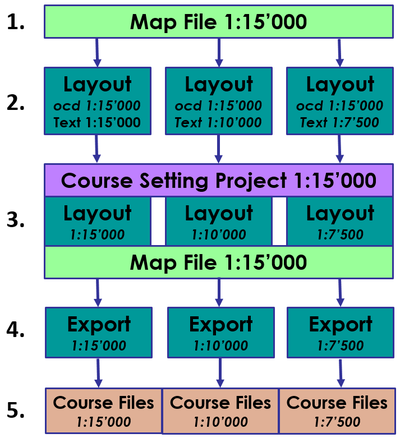 Work with just ONE [Course Setting File] and ONE [Map File] to avoid errors.

Go to Map>Change Scale. Enter 22’500 as new scale and do Enlarge/reduce symbols.
Go to Map>Set Scale and Coordinate System and change the scale back to 1:15’000.
Adjust the layout objects, so it fits again to the map.
Save the file as [Layout 1:10’000]