A CRT-File (with the ending .crt) is a text file with the necessary information for the translation. All CRT-Files which are saved by OCAD contain a table with two columns. Information from the second column gets translated into the information of first column. In some cases it is the other way round.

The following table from the Convert Imported Layers to Symbols function can be taken as an example. In the first column symbol numbers of the OCAD File are listed. In the second column the layer names are listed. The two columns are separated by a space character. OCAD converts now each layer to an object with the symbol listed in the first column. 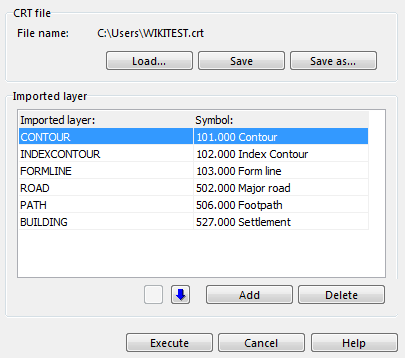