Difference between revisions of "Route Analyzer"

Note: This fuction is still a BETA version and will be developped further. Your feedbacks are very welcome.

This function is available in course setting projects for sprint orienteering maps according to ISSOM 2007.
It helps you to see and evaluate possible routechoises between two controls.
You will also get the shortest route for each course.

--> See a short video on Youtube, which explains you the basics.

When you are in a Course Setting project, you will see a purple bar at the right side called Route Analyzer. Click on it and the bar will open. 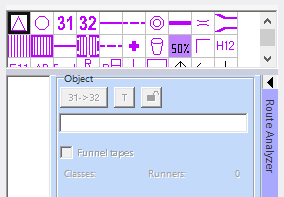 When you run the Route Analyzer the first time, the function will need some time to proceed all necessary steps to show possible routes.
This includes:

The shortest option is displayed with a solid green line. The distance of the route is also shown with a text symbol.
Alternative routes are shown in red color.

You can either calculate only a route between two points, the whole route of a course or the routes for all courses at once.
There are many ways to display the routes. 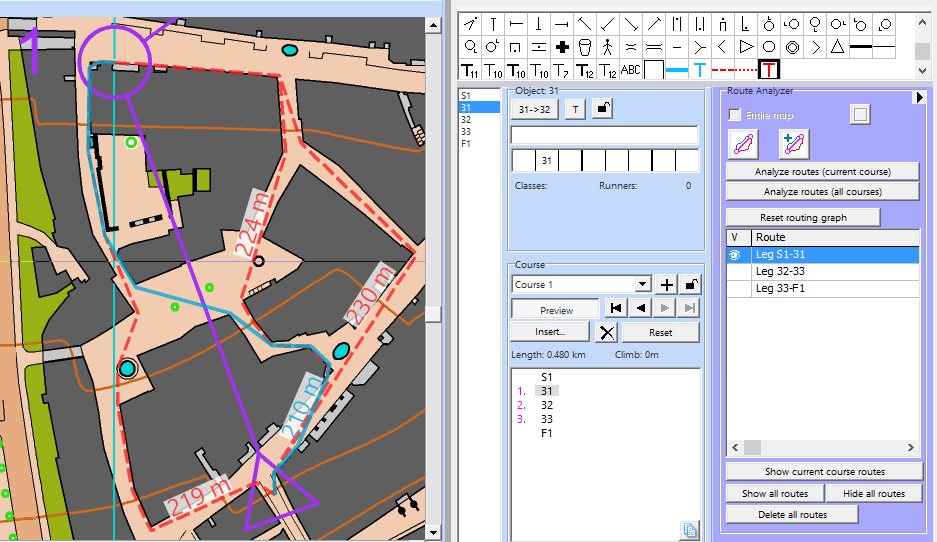 You can calculate routes only between two points.

The routes will be saved in the Route Box.

All routes will be saved in the Route Box.

You can follow the progress in the lower left corner of the OCAD window.

Click on Reset routing graph to process again all impassible features and build up the nodes.
This may be necessary if you detect a mistake in your map (e.g. an unwanted gap between two impassible features), which can be seen in the function Show Impassable Features.
After you corrected the mistake in your [Map File], you need to reset the routing graph, before calculating new routes.

All calculated routes will be shown in the Route Box.
You see on the left side, if the route is visible or not. The right side shows you between which two controls the route has been calculated.

Shows the routes of the select course in the Course Box. All routes of this course will be visible in the Route Box, all other routes will be hidden.

Show all routes in the Route Box.

Hide all routes in the Route Box.

Delete all routes in the Route Box.

Limits of the function

The Route Analyzer is a great function. However, it's not working in every situation.
These are the limits of the function: 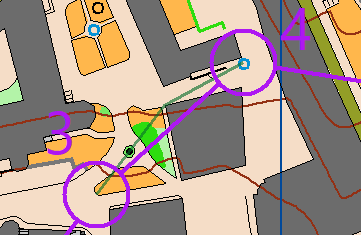 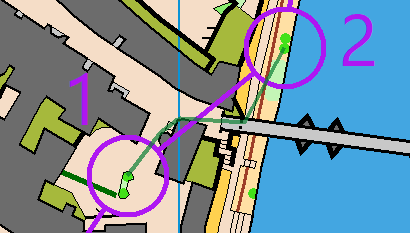 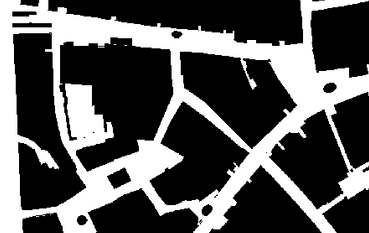 You can edit the routes manually. Just click on the routes and edit them. The length will not yet be adjusted automatically.

See the Tips with Keyboard and Mouse page or the Select Object and Edit Vertex page for more information.

Last but not least

Before printing/exporting your courses, be sure that all the calculated routes are hidden or deleted.
You probably don't want to give a map to the runners with all measured routes on it.

Credit goes to Fabian Hertner who helped us to develop this function with his ideas and knowledge.